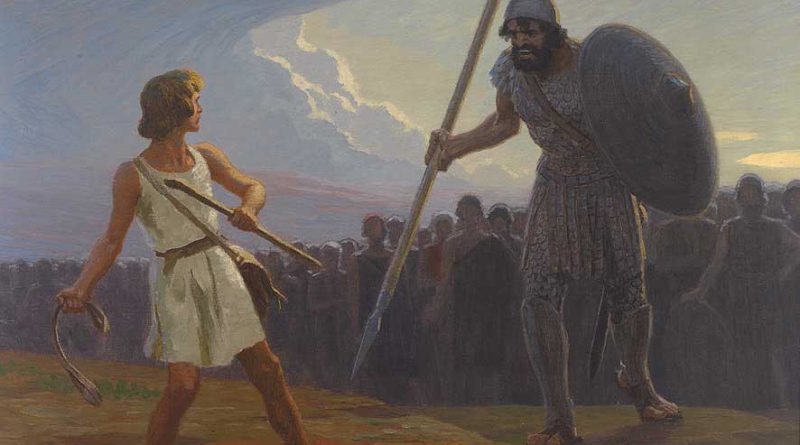 A few years later, the Israeli people were again attacked by their enemies, the Philistines. A warrior named Goliath came out of the enemy army. He was unusually tall and strong.

Goliath was covered in iron armor, had a long spear and a copper shield. Loudly mocking the Jewish soldiers, Goliath shouted at them:

– Let someone come out of your army and fight me! If he kills me, our soldiers will be your slaves, and if I kill him, you will all be our slaves.

But none of the Jews dared to fight such a giant. King Saul of Israel and his warriors were frightened. They prayed and asked God for his help. But Goliath did not pray to God, he thought so:

– Why should I pray to God when I am so strong and have such a sharp sword; I do not need God.

At this time, a young man David came to the Jewish camp and entertained King Saul by playing the harp. His brothers were in the army, and he brought them bread and cheese. The brothers told him about Goliath. David resented the giant’s shame on Israel, and he exclaimed:

– I will fight this giant myself! Although I am not as strong as Goliath, God will help me. How many times have bears and lions taken their sheep from my flock, and I almost always took their prey and killed them. I hope that God will help me win this giant, too.

With these words, David took the shepherd’s stick, five smooth little stones, and went to Goliath. The giant, seeing a young man coming to him, told him:

– That you were coming at me like a dog, with a stick and stones? Just come here, I’ll give your body to the beasts to eat!

– You’re bragging and proud that you’re so strong and have such a long spear, and you think it’ll help you. And I hope to the Lord of God, and He will help me overcome you.

With those words, David threw a stone and got right into Goliath’s forehead. He staggered and crashed to the ground dead. The young man ran up to him and his sword cut off Goliath’s head. The enemy regiments rushed to flee, and the Jews rejoiced and exclaimed:

You see, children, little and weak David prayed to God and hoped for him. So the Lord helped him to overcome the strong man and the giant. Likewise, if we do not boast and be proud, but hope in God, he will not leave us without help.

David became a favorite of his people. But King Saul envied David and wanted to kill him. Then David had to flee and hide from Saul. Fleeing from persecution, David continued to love his king and never wanted to harm him, though many times he had seen the chance to take revenge on an envious man.

One night David snuck into Saul’s camp and took a spear in the king’s tent, but did not touch the king himself. The sentry slept and did not see David coming to the tent or going back. Afterward, David showed Saul his spear from afar, and only then did Saul realize that David did not wish him dead.

“The Bible in Children’s Tales”, by P. N. Vozdvizhensky 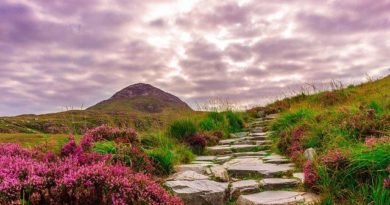 Expulsion from the Garden of Eden 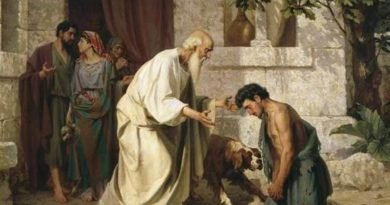 The Parable of the Prodigal Son 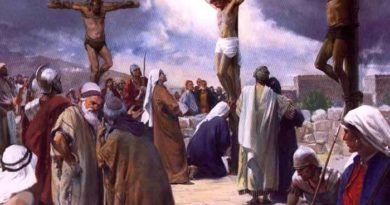 The crucifixion and death of Jesus Christ